In the podcast this week Ed and I got talking about the power of music and amazing effect that it can have on us and on all other living beings including plants. That got me thinking about my own musical life and my own studies of guitar, cello and Sitar and the work that we did, back along, with healing and using the musical forms of Indian music known as the Ragas. That set me off into memories of meditations and chanting, mantras and prayers. So, here goes…

The whole of creation is a vibrating sea of energy. At times that energy forms into what we see as matter. Rather like the difference. between steam and ice, the same thing but vibrating at a different frequency. The molecules in ice vibrate very slowly. When we apply energy, in the form of heat, the rate of vibration increases and the ice becomes liquid. If we apply more energy the liquid becomes steam. If we continue to apply ever more energy the molecules split apart in their base component of hydrogen and oxygen – H2O – the formula of water.

In the beginning was vibration

The biblical gospel of St John starts with this phrase…

‘In the beginning was the Word, and the Word was with God,

and the Word was God.”

For me God, in this phrase, is all of creation and all universal energy.

The word ‘Word’ when translated from the Aramaic, the language of the Bible, and taken back to its roots in classical Sanskrit, we find that what we are saying is that,

in the beginning the word was the given vibration

And that the given vibration resonates with all universal energy

The given energy is all universal energy

The given vibration is Om or Aum that is used as a mantra in many religions. In Ayurveda and Yoga it is Om, in Buddhism it is Aum, In Christianity it is Amen. In other faiths you will hear the same word expressed as Amin and Ahmeen.

This is the symbol, or Sanskrit letter that denote Om. It is a pictogram that tells its own story. 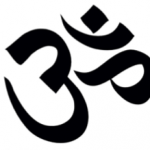 The top right are the symbols for the sun and the moon that we might describe as consciousness and unconsciousness. These may also be described as Yin and Yang or Purusa and Prakriti, and so on.

It is the interaction between consciousness and unconsciousness that gives rise to the phenomenal world of thinking feeling and doing. These are denoted by the three prongs of the Om letter facing to the left. This aspect of three is seen in all things there are no exception though sometimes we cannot, without a little work and research, find them.

In western psychology they are Cognition, Affection and Behaviour, In Yogic philosophy these are known as the Gunas (or strings) that create all things. They are termed Sattvia, Rajasia and Tamsia. In Ayurveda they are the three Doshas of Vatta, Pitta and Kalph. In body language they are the three body types of Ectomorph, Mesomorph and Endomorph. In colour they are the three primary colours of Red, Yellow and Blue. In electricity they are Volts, Ohms and Watts. In music if they are the three notes of the Major and Minor Tryads or the Tonic, Subdominant and Dominant of the scale. In Quantum physics as the Quarks Love, Strangeness and Charm. In Christianity it is Father, Son, Holy Ghost. In astrology they Cardinal, Fixed and Mutable. They are in all things.

When we listen to music we like it or dislike it. When we like music it is because it resonates with us and we are in harmony with it. When we dislike music it does not resonate with us and we are not in harmony with it. Because, well if the systems are the same we can use the same language to describe the interactions of energy.

In our relationships we like or dislike people. We might feel ‘in tune’ with someone or we may feel someone to be ‘out of tune, out of time or out of step’ with what is going on. When we are well our system is well tuned and when we are sick our system is disharmonious and out of tune.

Musical notes clash, colours clash, and people clash. In all of creation, in this sea of vibrating energy, we can be in tune or out of tune with life and experience. However there are ways that we, as individuals, can tune in, it is called Mindfulness. When we become mindful and sensitive to the vibrations within and around us we can chose how we associate, who we associate with and what we do with our own source of energy that is our life.

Be happy and be in tune.

Want to join the discussion?
Feel free to contribute!

This site uses Akismet to reduce spam. Learn how your comment data is processed.

TSHP287: The Benefits of Volunteering

TSHP288: The Power of Music
Scroll to top